Learn to Read the Office in Latin like St. Catherine of Sienna 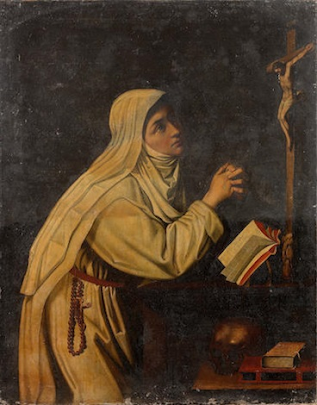 A profoundly significant episode in the life of St. Catherine of Siena, related by Raymond of Capua, indicated her great appreciation of the liturgy. Catherine did not know how  to read or write but was consumed by a keen desire to recite the Divine Office. To satisfy this longing, she determined to learn how to read. Raymond describes the sequel:

Catherine told me that when she decided to learn to read so that she could say the divine praises and the canonical hours, a friend of hers wrote the alphabet out and tried to teach it to her; but after spending fruitless weeks over it, she decided not to waste any more time and turned to heavenly grace instead. One morning she knelt down and prayed to the Lord thus: "Lord", she said, "if you want me to learn to read so that I can say the psalms and sing your praises in the canonical hours, deign to teach me what I am not clever enough to learn myself. If not, thy will be done. I shall be quite content to remain in my ignorance and shall be able to spend more time in meditating on you in other ways."

Then a marvel happened—clear proof of God's power—for during this prayer she was divinely instructed so that when she got up, she knew how to read any kind of writing quite easily and fluently, like the best reader in the world, When I realized it, I was quite flabbergasted, especially when I discovered that though she could read so fast, she could hardly spell the words, I believe that Our Lord meant this to be a sign of the miracle that had taken place,

From then on, Catherine began to hunt for books of the Divine Office to read the psalms and anthems and the other things fixed for the canonical hours.

Elsewhere, Raymond records how Christ would often visit Catherine: "He talked to her as one friend to another, so much so that she shyly confessed to me that they would say the- psalms together, walking up and down the little room like two religious brothers saying their office." During these meetings when they came to the Gloria Patri et Filio, instead of saying Filio, Catherine would bow to the Lord and say Tibi; "Glory be to the Father and to You and to the Holy Spirit, Amen".